This week we held our first camp of the summer. It was sponsored by the Tumbling and Trampoline program at Gymfinity and was a very successful event.  “We set our goal at 25 kids attending” said head coach Scott Nilles “we had 31. That was really nice.”

The camp opened at 8AM, like all Gymfinity camps, and the activities started at 10 AM.  Kids played games for warm up, stretched and began the first event of the day.  Every camper, from advanced team kids to absolute beginners, were run through a Flic Flac Clinic. “The clinic part of the camp, gave us an opportunity to see what the kids could already do and make an assessment for the rest of the day’s activities” shared Nilles, “From there, we knew what our priorities would be for each individual kid.”  The campers all worked on learning to do Flic Flacs (back handsprings) and the more advanced worked on the skill in combination with other skills.  After lunch the campers had some races on Gymfinity’s Big Poppa Inflatable and then it was back to more skill work.  The day ended with a brag session for the kids, letting them show off what they learned. “It started out slow, no one wanted to show off” said J Orkowski, Gymfinity owner and coach, “but once the kids started getting into it, there was no stopping them.  One kid even asked me if he could show a skill on the bars. We didn’t even work on bars!”

Gymfinity’s camp was staffed by J. Orkowski, Stephanie Orkowski, Coach Scott Nilles, Instructor Nicole Zeasman and a special guest coach that came all the way from Orlando Florida to coach at Flip Camp 2009. Coach Jen Bricker (watch Jen’s video here: http://www.youtube.com/watch?v=Opqy_agKD4o) is an amazing story in herself. Born without legs she became a power tumbler and placed 4th in the Junior Olympics for tumbling. She now performs all over the world with a partner doing tumbling, trampoline and circus silks. Jen had an opportunity to address the kids and shared her story of never giving up, even in the face of what others might see as an overwhelming obstacle.  “Jen and Scott have worked together before said Orkowski,”and it was a real benefit to the camp to have her join us.” When asked for a comment Coach Jen said “I really love the Midwest, the people are so nice and the kids were awesome. The camp was really fun and I was so happy to see that every kid learned something today, you don’t see that all the time. That was really cool 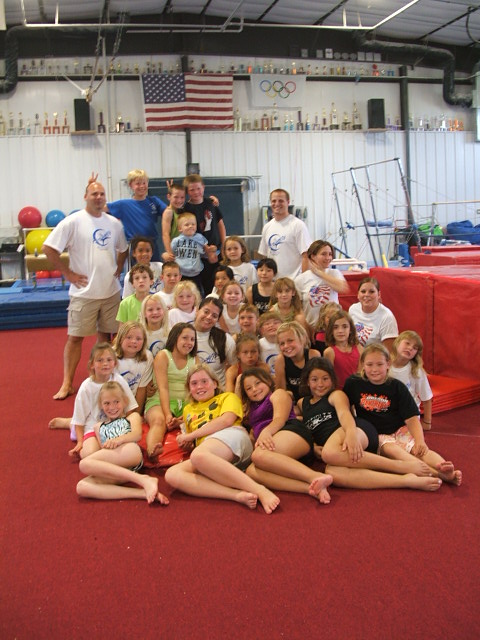 Camps with the coaches at camp

Orkowski also said that he intends to notify parents about joining TnT (tumble and tramp) classes because the kids were so anxious to learn but only so much could be taught in one day.  “We hope that the kids come back for classes, they were a super fun group to work with, we’d love to see every one of them again.”