As I see it there are 3 areas of influence on a child that forms them into the person that they will be: The family, The school and The friends.  The family is responsible for teaching the child the love, honor, respect, to be responsible,  to share and follow values. The school teaches them skills to learn how to learn, they give loads of information that will assist in decision making and the appreciation of their world. The friends teach a child that they are OK, they are welcomed, appreciated and loved. The friends also show a kid how to have fun. The best part is that no one of these “teams”  has lessons that don’t overlap. The one-two-three punch style lesson providers work together to form the young child into a functioning and productive, happy member of society. Sometimes the  lessons work together like a symphony and sometimes its much more dissonant.

As I see it, the coach is a factor that falls in the spaces between all three of these form building forces.  The coach’s lessons in conjunction with all three branches and include respect, responsibility, fairness, following rules, creativity, expression, drive and self-management. The right coach can assist the other forces into a guaranteed success for the child.

Let me give an example: Back story. I got into gymnastics because my brother was responsible for me after school. He did gymnastics because he was awesome at every other sport but never did gymnastics. It was a challenge for him and he, of course, became great at it.  However, when I would hang out at the gym at the high school with my brother I got to know the guys on that team (sadly they would all be gone by the time I got to high school). Bob was the funny guy, he played piano and could play harmonica while in a handstand. Tom was a pommel horse wizard and did things so effortlessly that I learned a quick respect as soon as I tried them and found how hard pommel horse really was. Al was really really strong and specialized on parallel bars, another really tough event. Then there was Coach Mel Leinwander; a very quiet man, who, one time as I heard it, out bench-pressed a football lunk-head in the weight room without saying a word just to stop the bully from bad mouthing male gymnasts.  His urban legend was heroic.

None of these guys knew that I idolized them. I was a dorky and quiet kid that always sat off to the side reading a book or staring into space (both of which I still do frequently). I was so intimidated by the skill of these young men that I would rarely ever do anything in front of them for fear of looking stupid. But when they were gone or otherwise distracted I did everything they did and tried to act just like them. I wanted to be them so I studied how they did things; learning skills and breakdowns of skills helped me be the coach I am today, but also I watched what kind of people these young men were.

When kids come into our sport we have known that they tend to stay in school and apply themselves to study with the same dedication they  apply to gymnastics. Gymnastics, like all sports, takes a large amount of personal time; time that if left unassigned without a constructive activity can be filled with less desirable activities. Sports can be a great place where kids learn positive social atmosphere: that is being surrounded with like-minded and positive influences and associations.  This social structure, fortified by the strong and positive families of each teammate come into play with that development I mentioned previously.

I mentioned 3 sides to the development of a child: Family, Friends and School. We know that teams provide positive association with teammates, their families reinforce positive family structure and even give kids a “second” mom and dad to act accordingly when a child’s mother and father may not be present. Lastly the involvement in sports like gymnastics give kids the tools to be better students and thus the 3rd side of the triangle is strengthened; all due to sports. 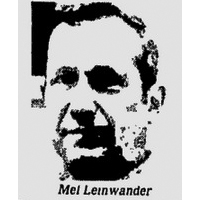 Coaches like Mel Leinwander reinforce all sides of that development: by introducing children to sports and values they work hand in hand with the parents, the school and even the friends on developing an unformed and sometimes lost child into a student-athlete and eventually into a positive and functioning member of society.  So who is Kurt? Kurt was on the team too, he was  pretty quiet and modest and really different. I learned that Kurt used to be a “burn-out”; that’s what kids who smoked and partied were called. He was a pretty rough kid who, for some reason decided to give gymnastics a try.  Kurt was somewhere between being Al’s parallel bar protégé and being in Al’s parallel bar shadow. So what happened to Kurt, the burn-out that gave gymnastics a try?  He became, if I remember right, State Champion on parallel bars in high school and that kid that was headed for a rough life is now an architect in Milwaukee and, dare I say, doing well.  Factor of change, Coach Mel Leinwander. The coach introduced self respect. Leinwander challenged Kurt to work to be more worthy of his own respect. Kurt, cleaned up and straightened out.

Coaches, like Mel Leinwander, introduce young people to new worlds; worlds that challenge them and entice them to surpass their own perceived potential. Everytime someone askes me what I think sports can do for children I think of Kurt and I explain to them the legend in my mind that is Coach Leinwander. To this day I am still trying to be like those role models of my yesterday.  Those guys who were best friends, unique characters, strong athletes,  great students, good people and did gymnastics too. But if I could be like any one of them, I strive to be coach Mel.  He never coached me as a gymnast, he retired the year before I came to high school, but he unknowingly coached me in life, and I don’t even think he knew me as anything other than “Ork’s little brother”. It amazes me how people can have such a huge impact on us and may never even know it.