This year the team traveled to New Orleans for the Jazz Invite. It was a great meet, and a lot of fun. But one of the highlights for me was the “Ghost Tour” we took through downtown New Orleans. I went with a few team girls, their parents, and some strangers on a walking tour of the French Quarter and areas outside the Quarter.

Our guide was a long haired, trench coat wearing Cajun. He spoke English but would occasionally spout out a word in French/Creole and then admonish us with a look of disdain for not understanding . As we walked he spoke of the city’s rich history from slave trading to torture, from heroic battles to voodoo rituals. It was creepy, at times, but even more, it was fascinating. As he spoke he would beg us to understand “his city” and it’s growing pains. He would stare into the eyes of one of the group as he spoke, and underline his comments with “Do you see?”  He was weird and creepy, but we were so 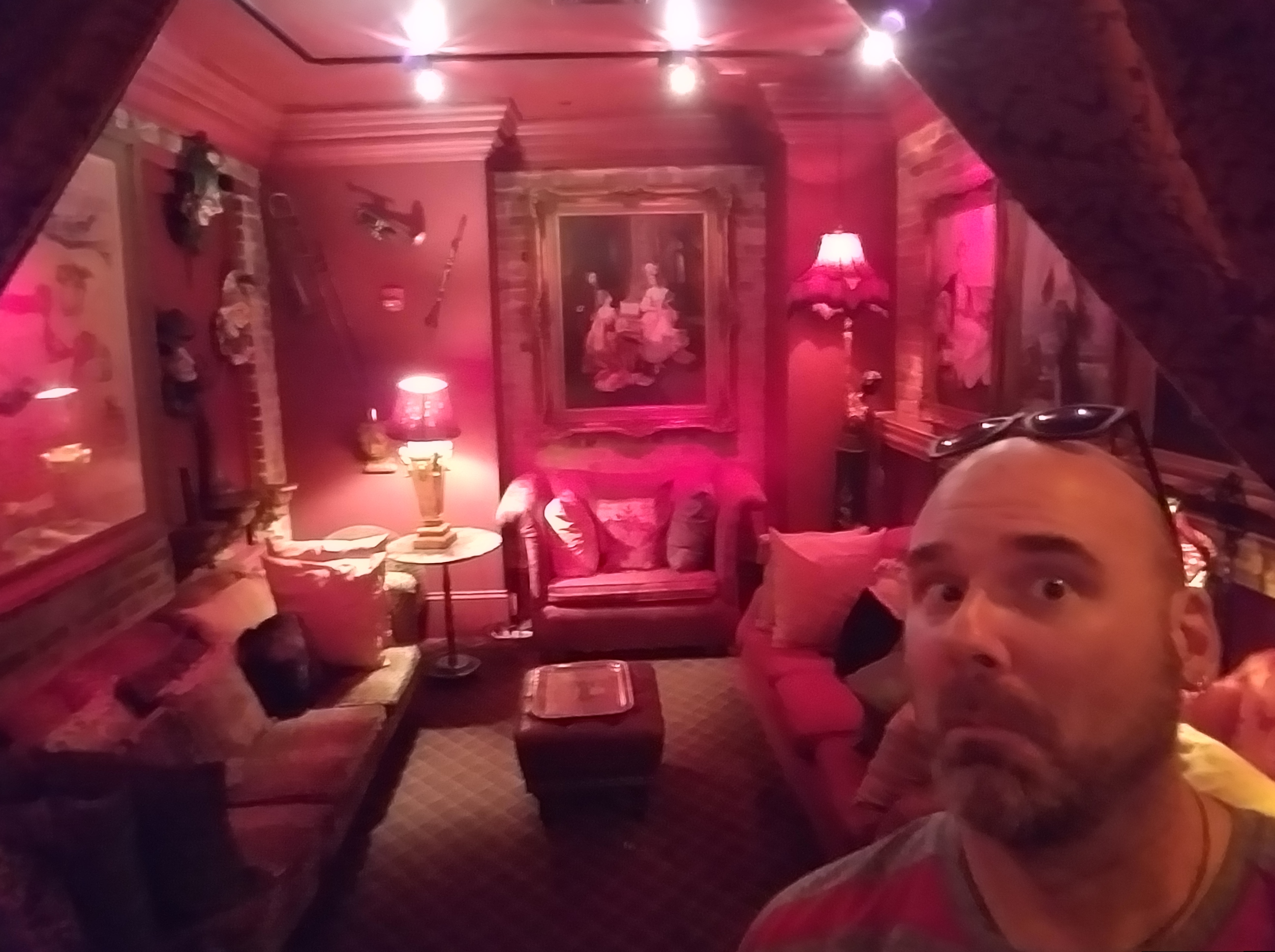 Here I am, freaked out,  in the seance room of a ghostly hotel.

engaged all through the tour that the time seemed to pass too soon.  In fact, the next day (during some free time) I went back to a few of the sites on my own, in the safe light of day, to see more of the historic area. But my favorite part was that night, when the tour was over, about 11 pm. The group dispersed. All but the Gymfinity portion of the tour had gone on to experience the nightlife of the Quarter. Our guide stayed and answered questions and followed up with us until it was just too late to be out. His responses covered architecture, history, and of course, the paranormal. But as we reached the end of the night, he made one more comment to our girls. I, for one, felt that his closure was worth the full price of admission.

He told the girls that they needed to understand that each one of them was their Great Great GrandMama’s dream. Those women, from so many generations ago, dreamed of a day when their offspring would be allowed the strength and freedom to become the people that they wanted to be. A world, or a time, when those future girls could live out their lives however they wished. He explained that today’s generation of young women have more opportunities than any generation that went before them, and he wanted to be sure that their for-bearers efforts were not delivered in vane.

He asked them if they were good in school? He told them that their ancestors would be ashamed of them if they didn’t use the tools they are given to make their lives extraordinary. The past generations could only imagine, in their wildest dreams, the day when a young woman would be allowed to challenge the world unfettered and unencumbered by the belief that she was incapable simply because of her gender. He stared into their eyes and asked if they saw that these old women worked, sweat, and bled for these girl’s ability to live that once only dreamed of life. He asked them if they wanted to make their Great Great GrandMama’s dreams come true. If they wanted to make those long-gone women proud of them. He wanted to know if they thought that what they were doing would allow those generations to feel that their own lives were validated. He explained that by living the embodiment of their grand-generation’s dreams that they would allow those spirits to rest. Were they willing to live their lives in a way that would allow that?

I had 5 team girls there, from age 10 to 17, and each one stood with their jaws clenched, their arms tight, and their spine strong and tall. Their posture answered his questions; Yes, they saw it. They knew that their lives, like all of us, are the embodiment of our ancestors dreams.

What a beautiful message to these young women and what a great end to the night, and some of the best ghost stories I have ever heard. That wild, weird, trench coat wearing Cajun, hit a nerve with each of us. My girls went home knowing that they had dreams to live up to, and not only their own. Powerful.

I love when life places people, in unexpected places, to teach us lessons. Page back through these posts to read about the time I got a dose of reality from meeting Picasso in, of all places, San Jose California. (page down from here). https://gymfinity.wordpress.com/page/10/