Do you have a person (or people) who hold such respect from you that their words carry more weight? Like if they told you that you were “doin’ OK” that you would then feel like you were? I have several people like that. Some are from business, some are teachers, some are coaches, some are just friends.

The other day, during team practice, one of my respected friends stopped in for a visit. He was passing through town and made a point to come by.  His name is Lon Arfston. He was one of the, as I call them, founding fathers of Wisconsin gymnastics. His club, LA Academy, produced the youngest National Champion ever, back in the 80’s.  Lon has coached all over the state, master coached at camps, clinics, and workshops. His experience led him to equipment sales and gym design after a brief retirement from coaching. Then he returned to the gym (none of us ever really leave the gym completely). He trained kids from pre-team to higher levels for many more years before officially retiring a few years ago.

Years ago, when Gymfinity was first being planned, I ran several ideas past Lon. He was always very free with advice and I liked that he placed trust in me, telling me that I was going to have a great gym one day. He helped me design the floor plans for Gymfinity and made sure that our traffic flow plan in the gym would benefit the most kids with the least congestion. I also ordered the majority of our equipment from Lon’s company To The Core. That was way back in 1998-1999

Through the years Gymfinity grew and developed into the program we have now, a training center for high level athletes that focuses on helping kids in the gym and in becoming productive, respectful and forward focused young adults. I was offered the safety educator position for of USA Gymnastics, and ran it by Lon to get his thoughts on either taking or leaving the opportunity. I took it. Later I was elected to the state board for USA-G and again, got input from Lon and others as I represented not only coaches from the big Wisconsin gyms but coaches from small gyms too. I represented businesses in the industry and businesses in the community of gymnastics. I often sought advice from Lon and others, and found such value in his wisdom. 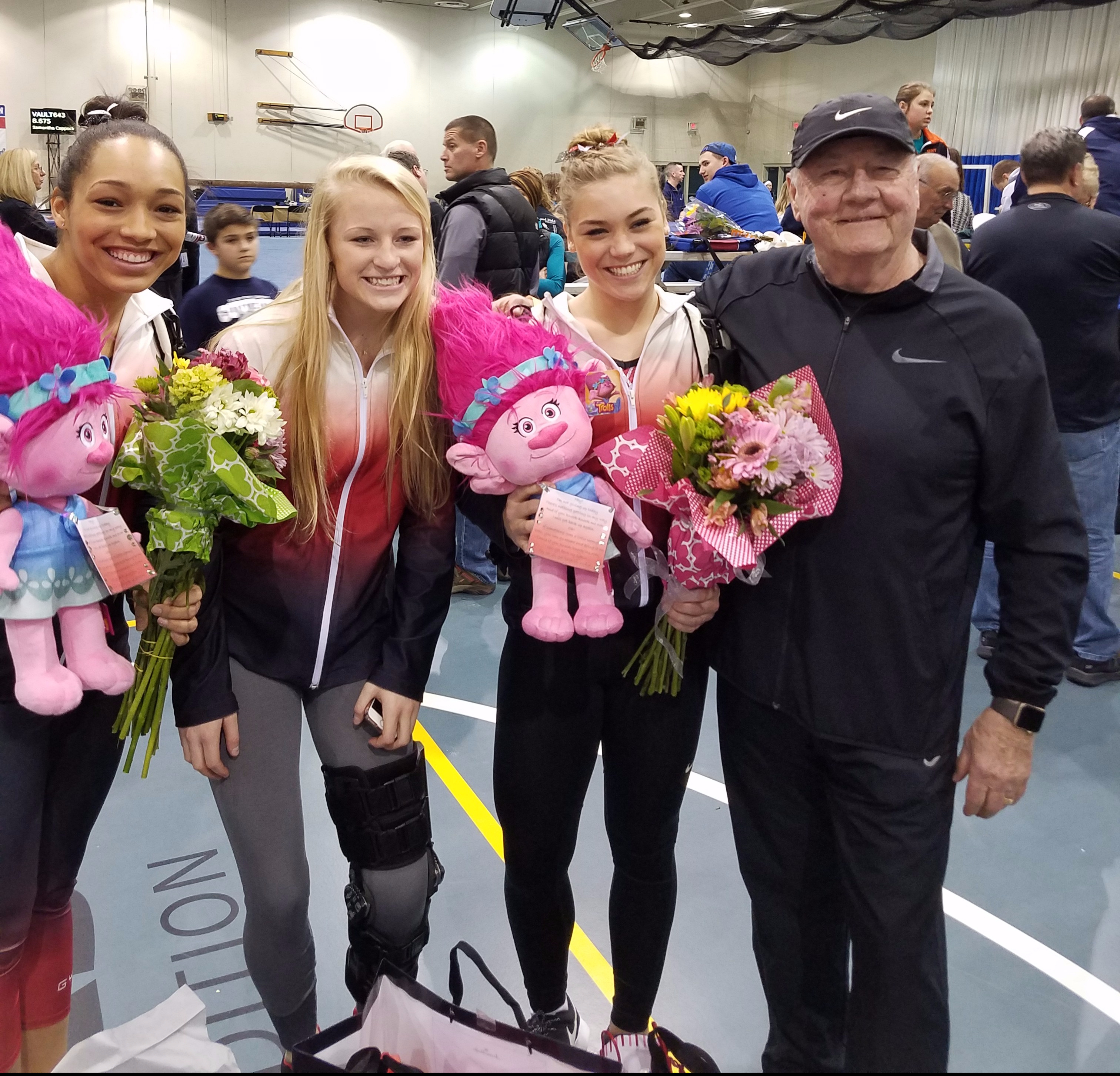 Last year at State Championship Lon was walking by and photobombed a team picture. The girls thought it was funny but had no idea who he was.

So, there I am coaching beam last Friday and in comes Lon. He had brought me some tools he used as a coach (motivational insights printed on cards), and books about technique and training structure. He thought that it might be something I could use. I gladly accepted them because it’s exactly the type of things I love to get, I study so many books that I could teach a course on coaching (I do by the way).  I was so honored that he thought of me, with so many other coaches that I’m sure he could have gifted this knowledge to. As we sat and talked a bit the other team coaches took over my group to allow me some conversation time with our guest. But Lon couldn’t help being a coach, he periodically interrupted our conversation with a correction to a near-by gymnast. I do the same when I’m in a gym, I even coach while watching gymnastics on TV, honestly it’s an obsession, but I digress. When it came time for him to leave, Lon shook my hand and told me that he always knew I would do a good job with a gym. He told me how proud he was of me and how Gymfinity was one of the best gyms he has ever seen. I joked with him and reminded him that he helped design it, but honestly his approval and respect filled me up.

After he was gone I explained to my team, who he was and reminded them of the photobomb at State. I explained how his opinion mattered to me, and I thanked them for being who they are and doing what they do. It’s because of them that I get to hear compliments like his.

There are days when, as a coach, business person, or even as a parent, that we wonder if we are doing it right. We wonder if we are screwing up our golden opportunity to make a good thing or to make a difference. There is always doubt. But having a man like Lon tell me that I was doin’ OK, made me feel like I was doing, well, OK. It was the shot in the arm I needed to get through a rough week and anxiously be able to tackle the week ahead.

So if you have a friend like that, be appreciative of the power they have. Be sure that you check in once and awhile to get their feedback and just touch base. It will validate you, or give you a chance to course-correct.  And if you are a friend like that, know the power you wield. Dole it out generously, because what the world needs now more than ever, is people feeling OK.