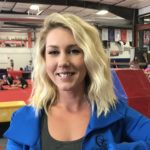 I would like to share a story about a wonderful little girl who inspired me. I have a 4-year-old girl in one of my Gym-Tykes classes who was born premature. She was brought into this world 8 months early. Yes, that is a 2-month-old baby! Every time I look at her I think “Wow, there is a miracle!”  My own daughter was 2 months premature, and I remember the challenges we had then, I could only imagine how hard that was for her mother and father. So due to premature birth, she grappled with severe developmental delays as well as an array of medical issues. She is fully aware that she is different. You can tell in her face when she watches the other kids. She may often display an expression of sadness, a type of longing in a way, to be like the other kids. But this to me shows great intelligence and her potential is there, just waiting to be tapped!

As I stated above, I have a daughter who was premature and born partially deaf.  I know a little bit about “challenges” and I like to call them “challenges” because I feel like the word “disabled” is DISABLING! The word means, to me, that a person with a disability, quite simply, cannot do. And when we continue to refer to a child with a disability as disabled, that child hears they are not able.  If we leave them on that train of thought, we will teach them to be complacent with their inabilities, and that’s not good for anyone. We need to try and always do better, be better, and grow. That limiting mentality is just sad and depressing. So, I like to use the term challenge. We all have challenges, right?! Sure, we do. So, these kids are just like everyone else. They may just have different “challenges” in life! If a child hears something is a challenge, it doesn’t sound as bad.

With my daughter, I noticed that she just automatically went to “I can’t” before even trying! She was so used to hearing “youe can’t” that she just didn’t! SO FRUSTRATING! I decided right then that I needed to switch up my parenting approach. I decided I was going to encourage her in every way to be a confident young lady and get her to say, “I can!”. Since then I have seen her develop into a hard-little worker. In addition, she started problem solving, AND then she grew that confidence to try!

Having that history, I started making the connection with my student.  I knew with her that I had to change up my coaching skills and adapt. I noticed she had the same mentality as my own daughter; she wouldn’t even try the simplest of skills, though I knew she was fully capable! Everything was “I can’t, I can’t, I can’t!” and it sounded so discouraging. Ick.  I’m a firm believer that if you say you can’t, then you will NOT! It’s a self-fulfilling prophecy. Simple as that.

I had a conversation with her father, and we came up with a plan; a confidence plan! He was going to work on her confidence at home, while I worked on her confidence in class. It was my goal to make her believe she was a gem and could do absolutely whatever she put her mind to. The start of class the following week she came in with nothing but smiles! So excited, so enthusiastic. Not the usual little girl I saw with such hesitancy. Usually she had her hands at her mouth, her gaze always down. Nope, not today! At first, I just took it as “Wow she’s in a good mood. Awesome!” Then we started our activity stations, and EVERYTHING was “I’ll DO IT, I’ll DO IT, I’ll DO IT!” Which was so uncharacteristic. I used to have to be extra attentive with her because, quite frankly, I thought she needed it. I’d follow her through each circuit. Oh, and not to mention her 5-6 “potty” breaks during each class, which I thought might have been a medical issue. If you think about what she’s missing with 2-5 mins each potty break. Classes are only 50 mins long and she was out for 12-30 minutes per class! Today she went only 3 times. This was definitely an improvement! I concluded that this was more likely just a nervous thing, and hopefully, with time, we can cut out her nervous potty breaks completely. Because I was able to catch on to this she will now get so much more out of each class! It felt good to know my change in tactics was working.

I also gave her more independence. The idea was to help her learn to trust herself to do things. Which in turn, would give her more confidence in her own abilities. We put the positive focus on what she was able to do and took away the negative focus off of what she could not. I let her go, and guess what?! SHE DID IT! She said, “I’ll DO IT”. And DID it every time! Talk about the power of self-fulfilling prophecy.

I continue to be very encouraging; with lots of “Great jobs!”, “Can I get a high five for that?!”, or “That was awesome!”. At one point I got down on my knees and looked her in the eye and said, “See. I knew you could do it! Look what happens when you try!” with a little poke on her belly. And oh, man she looked at me and I could see the light in her eyes. Which, without words, was saying “YOU’RE RIGHT, I REALLY CAN DO IT!” You could tell this was such a new feeling for her!

I know that with young children it takes them awhile to process or to transition. I assumed, like anything else, this would take time as well. I fully expected a slow progression, but all this change happened in one week! One week!

We are all more capable of achieving things when we initially think we can, and that should be inspiring to us all. It was for me! I think of all the big changes that will happen in her life now: by just starting with a tiny bit of confidence. Isn’t that what all we need? And now the sky’s the limit for this little 4-year-old girl! To know I’m part of that positive change, to know I’m a part of making this child feel that good about herself, to help her fully believe in herself, and smile from ear to ear… that’s empowering! The child that went from “I can’t” to, “I’ll DO it”, and she inspired me today…. And what a wonderful feeling that is!