It started, officially, in December; and it will finish tomorrow.  We began training 19 girls in the Junior Olympic Gymnastics program.  They had good meets, they had disastrous meets, but everyone one of them, and us the coaches, learned from every lesson.

I had two seniors this year, Meghan and Nicole. Meghan had been with us for a number of years and took some time off to compete with the High School team in Verona.  But she wanted to go to LaCrosse, a school with a National Champion team and she felt we could help her prepare better for the chance to “walk-on”.  She came back to team, and like the prodigal daughter, we welcomed her back to the fold with open arms.  Nicole has been with us since she started team.  I have never seen such a beautiful dancer and at State, when I watched her last routine, I am not ashamed to say, I teared up.  Gymfinity will miss these two great girls and  I will miss them alot too.  It is odd how fast kids grow and are gone.

We had 3 level 9’s.  They had a bit of a rough season at times but, at times, they were amazing.  Haley, Mari and Aryn. You guys had a great year. I hope you learned a lot and are already focused on being bigger, better and bolder next year.

We had a big group of Level 7’s this season and they made us proud.  I remember when they first started team in March of last year; I looked at Matt and said “What have we done? These kids might never be ready.”  But they rose to the challenge and succeeded in every aspect of the word.  After a few practices, I knew they would make it.  They worked so hard and they will always succeed when that happens.  Watch for this group coming up.

We had 5 qualify for Regionals, and that is tomorrow.  The meet that will end the season with the biggest Optional team Gymfinity has every seen.  I foresee good things. Watch Twitter for immediate updates.

I came home from running errands today and posted in my yard was the sign in the picture.  That summarizes the season, team spirit, hard work and gratitude. Gratitude not just to the coaches but for everything.  This is a group of girls that has real appreciation for the important “stuff”;   Team, Family, Being healthy and Getting the chance.  I said it 1000 times; win or lose, regardless of scores, these 5 girls and the whole Gymfinity Team, are champions.

If anyone should say thank you, it’s us for the great and supportive parents I have had the privilege to work with. Thank you for the opportunity to work with your daughters, thank you for believing in Gymfinity and thanks for all the support. I wanted to say that before it was over this year. 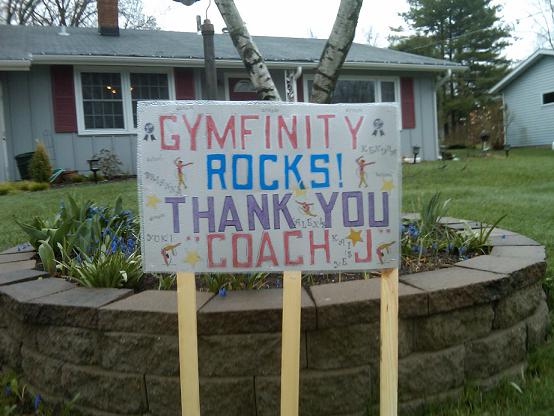