This last week we had the Gymfinity Spring Show Flip Fest 2011. It’s a week when every developmental gymnastics, tumble and tramp, Gym Tyke, Special Motion, Sprytes or Funtastics kid gets to show off. The teachers develop short routines and the kids perform. Parents video and snap pictures wildly but mostly cheer and clap. It’s a great experience for everyone.

There is a lot of work that goes into the show week. Directors Alcey (developmental Gymnastics and gym Manager) and Sue (Gym Tykes)

begin planning months ahead of time. There are many arrangemnets made and plans developed but often little can be done until closer to the date. At that point we know how many kids to expect, which teachers will be assigned to judge or supervise a group, awards are ordered, t shirts are designed and printed and we’re off to the races.

During show week, Alcey is usually running around with last minute changes and fixes and all the while looking calm and in control (I envy her ability to do that). Sue is lugging around equipment and keeping things in line, not to mention providing food for the staff She’s quite a cook). The staff arrives and knows just where to go, what to do, when to do it and there is minimal confusion.

The kids arrive and they are led through a warm up taken to stations and they perform their routines and skills while moms, dads and friends get to see how well they’re doing.

But the show is more than all that. Explaining how it works and how it went is like defining a person by explaining the human skeleton. It’s just the frame work.  What really makes it special is the unique value of it, that is the important part of the spring show.

We often talk about all of the intrinsic benefits that Gymfiinity provides and the show performance is a great example. Having kids get up before an audience is an enormous benefit to their self confidence. The shyest of kids will be in front of a crowd and be comfortable doing so. It takes a good helping of courage to put yourself out there and we at Gymfinity never under value that.  It’s by appearing in front of crowds over and over that I, a pretty shy kid (and if you know me, a relatively shy adult when not working) overcame a lot of fears. Public speaking, or occasionally being a center of attention hold no drama for me now, thanks to gymnastics performances as a kid. That’s where it started.

One show, we had a young girl who just didn’t want to be in the performance. She was there, she was dressed for it but she didn’t want to get out there. I went and spoke to her. I told her that she had done so much and it was time to show it off. It was the reward for all her hard work. It was a chance to show her dad that she didn’t waste her time when her provided the opportunity to do gymnastics. It was natural to be nervous, but it’s the exact same feeling that you get when you’re excited and anxious, and those are good things. I told her that these people want to see her do her thing, she had a lot to show off. I tried every tactic to get her to do it. She didn’t.  Later, when reading the names for the awards presentation, I called her name and up she went for her award and applause.  I asked her tyeacher Scott, how he did it. HE didn’t. It was Bri, one of our team kids. She say with the girl and somehow convinced her to do the show. There is a way kids have of talking to each other that we adults can’t comprehend. I don’t know what she said, but it worked, and I’m sure, knowing Bri,  it was the kid-speak version of what I wrote here. 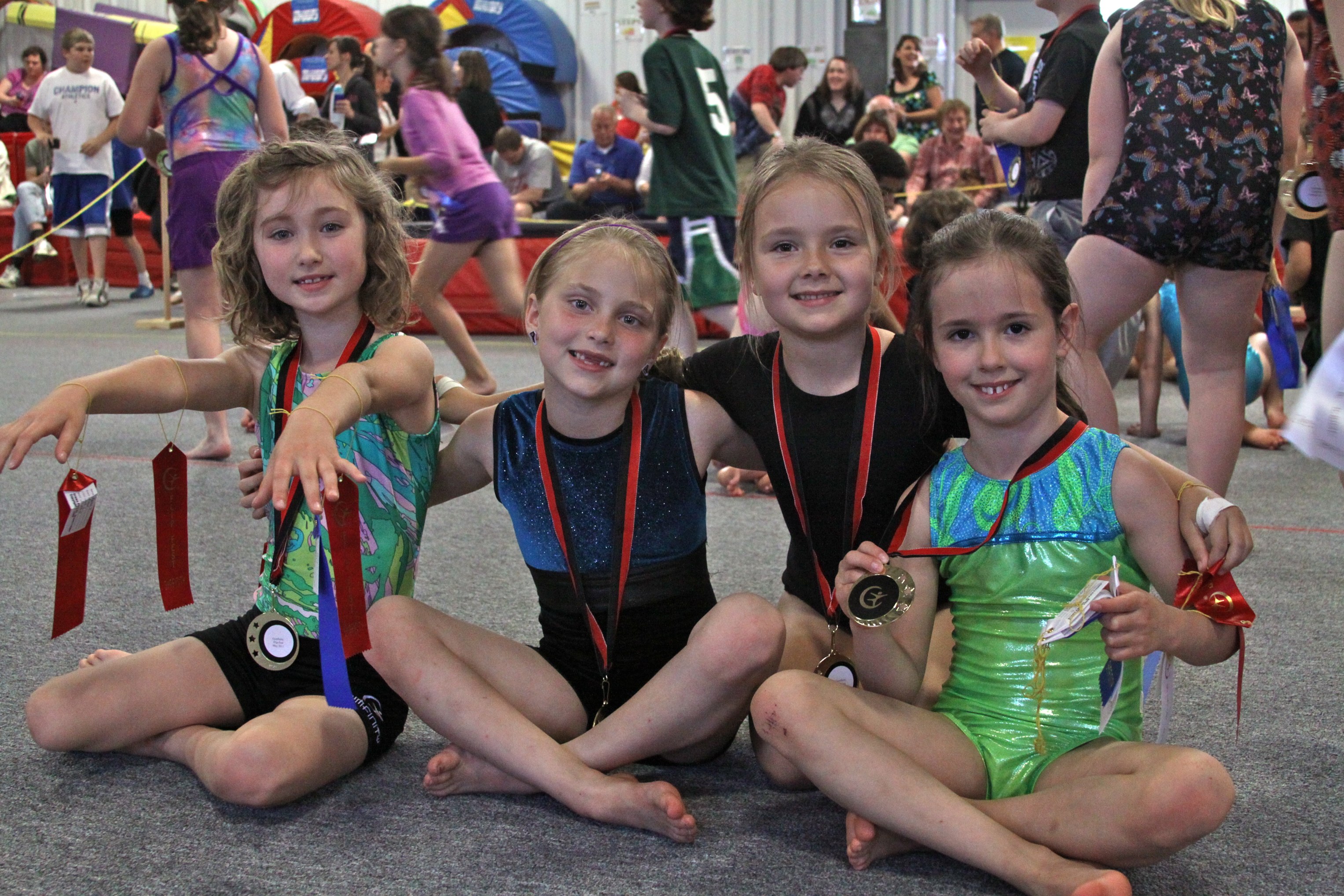 Q. Which child is happy? A. All of them.

I want to thank everyone who attended the shows. Thank you for your applause and appreciation of every child in the program. Thank you also to Alcey and Sue and the rest of the staff that taught the children. We have a great summer planned and our teachers are so excited to continue with their kids.