I have had parents withdraw their kids because it was too expensive or because it conflicted with family time. I have had them pull out because it conflicted with school. All of those are valid reasons to change a child’s schedule. I understand each one, and in fact we have strategized to be sure that these are infrequent issues at Gymfinity.  But statistically most kids (75%) drop out by the time they are 13.  Often in gymnastics we see kids pull away because they have a fear of having to do bigger skills and they are old enough to evaluate the risk. They are afraid. Sometimes their skills level out and they feel stagnant. That leads to frustration and the decision to leave. Again, these are reasonable and I have dealt with them all.

Unfortunately I have also dealt with kids who quit because its what they have to do to get their parents back.  I have seen parents who have identified themselves through their child’s participation.  Kids miss the mom or dad that just loves them, the one that doesn’t have performance conditions on affection.  I have seen parents more upset about a fall on beam then their own daughter. That’s not right, what control did the adult have for the event? None. Well maybe not. I have had parents coaching through the windows at the gym with complex hand signals and/or clandestine meetings in the bathroom or coat room. So maybe we can attribute that fall to the parent. (Sarcasm…sort of).  When a parent flips the roles of coach and parent it confuses the athlete and distracts them from doing their best. Kids may quit to get the roles flipped back. 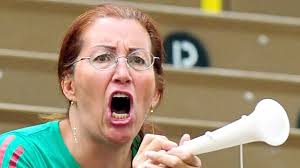 “If you don’t win, people will think I am a bad parent”.  Stop laughing, I have heard this said out loud  in veiled parent speak. Often adults think that their value is based off of their  child’s performance.  I remember that when  my oldest played soccer and he was not so good. It wasn’t that he had no skill, it was that he didn’t care to play. I stood on the sidelines in rain and cold (what an awful sport for spectators) and watched my son disengage. I convinced myself that it reflected on me as a parent or worse, as a coach. In fact I remember telling him that people would think less of Gymfinity because he wouldn’t play soccer better.  Yes, I am going to a parent time out for that.  Then I realized that he was like me, he didn’t like team sports, he liked individual sports. He was, in fact, confirming my genetics through his play, ironically.  I have since learned how to better deal with my child in sports and I allow them to own their own performance. (Read more in the next Gymfinity post).   When I was so wrapped up in the game I forgot to be Owen’s dad. He had to quit (and I had to grow up) to get his dad back. I made the transformation from super-critical-man back to Clark Kent, without even using a phone booth. But there was a price to be exacted for it. My son never got to experience the fun of soccer without a 250 pound dad on his back.

Sometimes parents demonstrate their intentions to get their children to quit right in the stands at a meet.  Being upset by a score is futile. We tell our team kids that you cannot control what a judge gives you, you can only do the best you can do, at that moment, in that place. Who knows if a judge had a fight with her husband or missed her morning coffee, or maybe even had too much morning coffee. There are outside factors affecting human performance that are out of our control, so why freak out? . Kids get that; I wish they could teach their parents. I have heard parents bad mouth other athletes or judges.  I have heard them criticize facilities and even weather. All of this is affecting their child’s performance. Yeah, right.  When a child sees and hears this displeasure from a parent they feel that they have in some way disappointed their parent, or in the least, been the cause for frustration and unhappiness.  “Sorry, mom. I did my best“.  And yes  I have even seen children punished based on performance. What does it say when a little girl who loves the sport  has to take down all her gymnastics posters for 1 week because she fell off the beam? It speaks volumes. Unfortunately it tells a child that their mom and dad want them to quit so they don’t have to get punished anymore.

A great exercise is to ask your child what their goals are before a season. Most kids will say that they want to have fun or qualify to state meet. Most goals (if Gymfinity has done it’s job) are not score oriented. Let your child share some goals and then in your head ask yourself if they are the same goals you would have for them. If not, then you have to come to reality. It’s their sport, not yours.

When you can separate yourself from them and allow them to be an athlete; allow them to experience their sport and own their performance then you will have a child  that loves to play and feels fulfilled playing. When your goals are different then theirs, when you measure yourself by their performance, when you blame everything for poor play then you are opening the door for your child to quit sports. What’s worse, is that you are creating a pattern for them to be dissatisfied and non-committal for everything they do. Because they will never be able to please you. If that’s the case, good job you met your goal; but you need a parent time out to examine your behavior.