This weekend the series Coaching Bad premiered on Spike TV. I had to watch it. 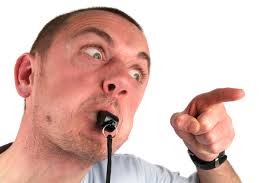 In a nutshell, several coaches from various sports are brought together to work with an anger counselor. This is all done under watchful former NFL player and current motivational speaker Ray Lewis. There were some real characters: a speed coach that races his athletes and berates them when they can’t keep up, a volleyball coach who got fired because of her abusive actions, a hockey coach/referee that hit a child with a stick when the child pushed him, a football coach that routinely wrestles his players (under 12 years old) to the ground, and a few others. They all call their kids names, tell them they are worthless, and dole out punishments for any and every reason, and this is what passes for a TV series?

I take issue with two things in this show and the very premise of it. First, and quite simply, these people will not change that easily; if at all. These people are reinforced when they are abusive, intolerant, dictators and you can’t turn a mess that big around with one show and a few “motivational moments”. Though the show is trying to demonstrate that they have the power to make bad coaches into good, the fact is that these people will likely return to their habits and negative personalities as soon as the cameras are off.

Next, I take issue with presenting coaches that are so far gone that they become caricatures of a stereotypical “bad coach.” They are presented to us as representative of a profession that really should be held to high standards. As parents we want to best for our children. We want the coach that can get the best results out of our children and we want the coaches that helps us raise our children to be successful and strong.  We live in fear that the person working with our child  could be a negative influence on our most precious children. But the fear is easily played on and we are manipulated. The truth is that 99% of coaches are there to encourage children, training the skills but also caring for the child as a person. These television shows that play on our fears lead us to believe that there is a villain, more awful than we can possibly imagine, around every corner. It’s simply not true. I am in the profession and I have seen good coaches and bad, yes they do exist. But we give so much attention to the bad behavior that we make people feel that it is typical. We never spend any energy on praising the good coaches. Where is the series that shows a coach that goes above and beyond for an athlete? Where is the series that glorifies the men and women who spend their weekends working with OUR children? It’s sad to me that these fear tactics always get the most attention and they beget more of the same.

Since Gymfinity opened we have been approached twice by television producers who were pitching a series idea of middle to high level gymnasts training for championships. We were interviewed, screen tested, and had to do video interviews with a few parents to submit for evaluation. Well, to summarize, we were too normal. During the process (from the second company) I was asked to provide a list of parents that are very “engaged” in their child’s performance. I was asked if we had any parents with alcohol concerns. (What?) I was asked how often I raise my voice in the gym and

what a typical “Punishment” would be if a child didn’t perform well. When all of these red flags went up, I decided to pull the plug on the project. They didn’t want the reality of children working hard, sweating, straining, and dreaming of bigger things. They wanted another Abby from Dance Moms, a villain that an audience would hate. (PS, I have a friend that knows Abby from Dance Moms and she assures me that the show is 90% staged, as Abby is nothing like that in real life).  The upside of providing what they were looking for would be fame and fortune, Abby’s studio is at record enrollment because people are buying into the show’s version of reality. But what does that say about the parents who enroll their children in what they believe is a potentially abusive program? Oy vey, the problem is deeper than a bad coach.

One character on the Coaching Bad show actually says (paraphrased) that this is how football is coached, the parents don’t get that, but the kids love it. That is when my reality meter broke. The kids don’t love it, they live in fear of you. Your reality is distorted and you are a freak. But there was some truth; the parents of his team, in reality, don’t get it. They value the trophy over their child’s happiness. If they don’t get that their own priorities are mixed up then that is a potential new series. But the disclaimer is that those parents, like these coaches, are freaks and are not typical. In order to get the TV folks to stop glorifying these freaks and these fears we need to stop watching what they put in front of us.