I have, for a long time, used the analogy of motorboats and trains when I speak to my team kids about motivation. As I raise my own children I realized how this also applies to anyone who may need a little flame placed under the backside.

I ask my team kids if they are a motor boat or a train. I explain to them that I want to help them, I am there as a resource and can provide them drills for skills, code application for routine development, and simple guidance as they progress through the sport, but I need to know what drives them. 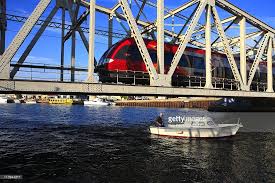 Are they a Train? Are they the type that needs to be pulled? The engine in front, pulling the trailing cars. The conductor sitting in the engine car and deciding where the train goes, how fast it travels, and when it can make stops? As an athlete, do they need me to pull them? Are they needing to tuck in behind me and have me call all the shots, determine the routines, the meets, the training and pull them forward?

Or are they a Motor Boat? Are they the type to be in the captain’s seat and determine direction but need a push from the engine that sits at the stern? Do they have direction and drive and just need the coach as a boost and occasional force?

I have often spoken about the development of the coach relationship with kids in the sport. When they are young, or lower level, the relationship is very much like a master and servant. The coach says “jump” and the gymnasts jump  until Simon says stop jumping, (that works particularly well if the coach’s name is Simon). All decisions are made by the coach, and the gymnast begins learning about how they will develop by seeing it planned out in front of them. In the mid-levels, around beginning optionals, the relationship becomes more like a partnership. The coach is still the primary director but the gymnast has input into their own development and performance. I often say, at this stage, that the coach says “jump” and the gymnasts now ask, “how high?” In later levels and ages, the coach relationship becomes more like a reference that the gymnast can come to for assistance. At this stage, the gymnast directs their pathway and the coach helps in facilitation. This is when the gymnast may ask “Should I jump?”. The relationship and the most effective coaching style evolve over time.

I any event the gymnast is going to need motivation, either internally or provided for them externally. This is true and applicable regardless of the relationship level with the coach. When the coach, boss, teacher, or parent, understands how the child is motivated they can better help the child move forward. Motor Boat or Train? Neither is preferred and degrees of both may be present, but it’s understanding at any given moment which vehicle you are driving that makes a coach more effective at any stage of the game.