I wasn’t wrong. Much of the food at fast food establishments is laced with the least likely (and least explicable) of ingredients. But so are many other foods we frequently consume. 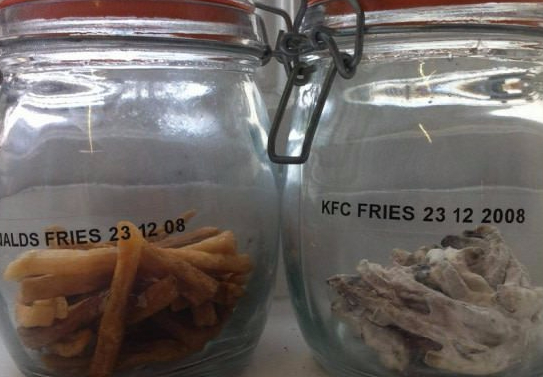 Did you know that a fast food burger will remain unchanged for approximately 14 years if left uneaten? There is such a low content of water and natural ingredients that the “real beef” burger doesn’t even spoil.  Oddly enough the French Fries at most fast food establishments are also resistant to age. They usually rot out in about 3 years, but you have to ask; if bacteria won’t eat away this “food” why would I?

Did you know that due to the high levels of High Fructose Corn Syrup the soda we drink at fast food places will damage our stomach walls, debilitate our vital organs, and strip our teeth of enamel? In fact it may be safer you nuzzle up to and eat straight an entire bowl of sugar rather than suffer the consequences of the substitute. HFCS also keeps us from quenching a thirst, that’s why we can finish off that “Thirsty-Two” ounce pop and still be…. Well… thirsty.  But it does satisfy our consumer bone. We feel that there is value in being able to refill a drink for free, when in truth, that might be the worst thing you can do.

And don’t get me started on the dispensers. Most places that have “serve yourself” dispensers have been found to have trace levels of fecal e.coli evident on their surfaces. That means that most places have nozzles touched by people who don’t clean their hands after using the toilet. Mmmm. Still thirsty?

Did you know that breakfast is just as bad as a shake? We have, in the past, often traveled to meets and had to resort to a quick grab and go breakfast at a fast food stop. But we hardly will ever do that again since we found that most places substitute eggs with something called Premium Egg Blend, a chemical mixture that has many of the same ingredients as my soap and shower gel, namely glycerin. Though eating glycerin won’t kill me, it’s good to know that if I’m really late, I can eat half my breakfast and shave with the other half.

Did you know that when you eat beef from a fast food place, or even a large chain family dining restaurant, that you are likely filling up on ground up bits of over 100 different cows? Usually the less choice cuts are ground and combined with fat and chemicals, then shaped into patties and sent off.  I have had friends tell me that they would rather eat at this fast food place than that place because at least this place uses “real” beef. It may be real, but it’s not any more appealing when you know the process.

Did you know that in Wisconsin, we have access to real cheese? Unfortunately, you won’t find it on you McBurger or Whopper. Fast food cheese is less than half dairy product and mostly oil, chemical and preservative. I recently went to visit a gymnast that graduated into college and we went to eat. When my food came out I looked at the cheese and asked “what is that?” We here are pretty spoiled by having access to real cheese, when the rest of the country has to eat that mystery orange square they call cheese. But don’t be fooled, it’s still mystery square at the corner fast food place.

Did you know that we are tricked into eating sand when we order spicy fast food? It’s true, most fast food chili’s or Tex-Mex menus use and ingredient called silicon dioxide in their recipes. It makes the taco or chicken nugget taste a little peppery and manufacturers don’t have to use as much real food, higher cost, ingredients. Now, I’ve gotten sand in my mouth before, but never once did I think “mmm. Chalupa!”

Ok, I’m grossing myself out, and probably you too. So here are a few more remaining thoughts to leave you with:

Did you know that most fast food chicken nuggets are not chicken but comprised of fats, bone, nerves and “additional tissue”.

Did you know that fast food salads are usually laced with saturated fats and high levels of sodium. The intention is not to offer a healthy option, it’s to make to thirsty enough to order the free-refill-extra-large soda.”

Did you know that much of fast food is laced with coloring and dyes that have been shown to change behavior in children. Kids frequently exposed to these chemical colors often become irritable, hyperactive, and bad-tempered.

Did you know that the caloric intake from one small meal provides us the equivalent of what we would burn on a 4 hour hike. So to maintain a healthy balance or intake and output, remember to allow for 4 hours of activity following the consumption of a small burger, small fries, and a small pop.

Did you know that honestly, I have been no stranger to the ordering queue at fast food places. I grew up on McDonalds, Burger King, Arby’s, and others. But as I grew and became educated I have made more informed decisions. I am a firm believer in the philosophy of moderation. I don’t eat fast food 6 times a week anymore, maybe once every other week. But I stay away from the pop, the chicken nuggets, and the shakes.

So, no on the shamrock shake this year. But I did find this yummy, healthy, natural substitute that I made at home. I plan on bringing it to the team and fooling them into loving spinach shakes. If you are interested in the outcome of my switcheroo, comment below.