Small talk at a party: “So you coach gymnastics. Boys or girls? Why?” I’ve been asked this about a hundred times, and everyone is surprised when I say “girls.” I think most people just think that a guy coaches boys and a woman will coach girls.  Not true.

So why do I  coach girls? I’ve tried coaching boys; it didn’t go well. I found that I spent more time watching wrestling and saying things like “I can wait until you are ready to listen….” Than I did actually coaching. It takes a special kind of a person to coach boys. I am not that special.

My standard answer when people ask “why girls” is that “girls listen better, pay attention more, and are usually smarter”. Then the universe graced me with two sons. So, I can’t use the “smarter” quip anymore, but the rest was pretty true.

I started thinking about why the difference was seemingly such a no-brainer to me but so hard to explain to others. As usual I ran the self-conversation during a long car trip and made frequent stops to jot notes. Then I did a little organizing research. Here’s what I came up with:

I was raised by my mom. I had a lot of respect for her and I aspire to be a parent like she was. She was confident, decisive, and strong. I realized that many of the girls that I coach have those attributes but often they don’t know it. So, on one hand, I think I want to help them develop those skills. Boys, it seems, are naturally confident, usually decisive (not right or wrong but decisive) and they usually show strength at an earlier age.  But why?

The best I can determine is that in terms of evolution males have always been more independent, had to show strength, and provide for the smaller weaker gender. Females were dependent, had to rely on the protectors and providers for survival, but today those traditional gender roles and attributes are in gray areas as women have become more independent and strong. when it comes to society we are slow to accept this and often the discrimination of our beliefs is unfounded. A big boat is slow to turn around, and this belief that woman are the weaker sex is a big boat of old fashioned thinking.

Developmentally, there is some science to this as well. As fetuses develop, female brains are bathed in estrogen as early as 8 weeks after conception and the hormone bath develops brain areas that will be suited to language, communication, and emotion. While male babies are flooded with testosterone, which develops areas of the brain that focus on aggression and more base needs. As children grow, society reinforces this with subtle prejudicial statements like “she’s so girly” meaning dainty and innocent, and “boys will be boys” which means boys will be rough, uncontrollable and dangerous.

Society tells girls that they need to make the tribe happy, provide harmony, and develop relationships. Meanwhile boys are taught to stand up for themselves, be assertive and challenge the world.

How gymnastics plays a part in development 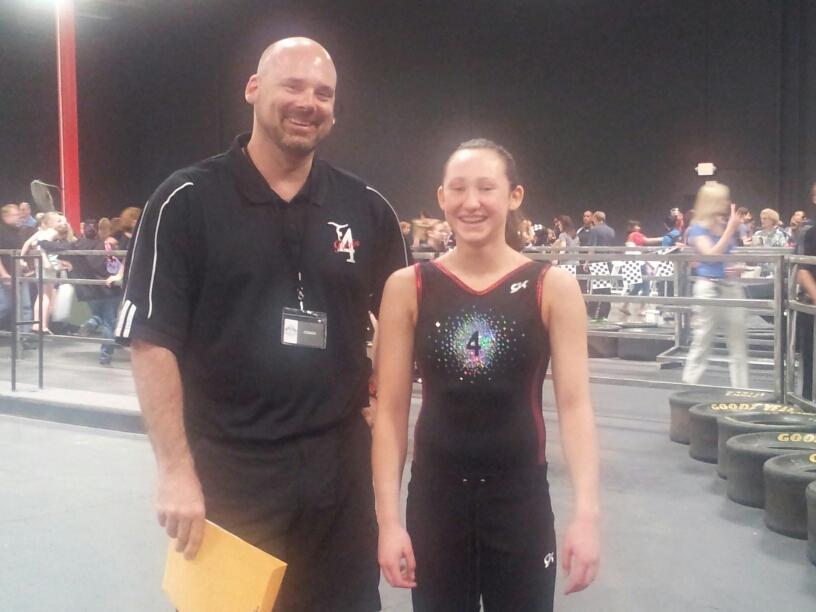 One of many reasons I am proud to coach girls, here’s me with Bri Slonim.

Because females traditionally have been protected from risk they have not had the benefit of learning from their failures. I believe that this is where sports, particularly gymnastics, has a great developmental benefit. I think that girls can be shown that they can approach perfection, seek to surpass their own perceived potential, and encouraged to take risks. I believe that in so doing, children (not just girls) are given an opportunity to assess their efforts, learn from their skinned knees, and get back to their feet, try again, and grow stronger. Nothing is better than gymnastics at showing you that you did not do your homework. Our sport will let you know when you don’t work hard enough, and it will let you know in no-uncertain terms.

My mother, by virtue of divorce and strict Hungarian parents she had to learn that if she wanted something, she had to work for it. She never took breaks, and when she had 3 sons she knew she had to teach us those very lessons and values. I think that as a pre-parent younger coach starting in the industry,  I felt a strong sense of mission to share that lesson with children growing up. I think I gravitated toward coaching girls because they seemed more eager to learn from me. Boys, at least by the impression they try to give off, already knew everything.

Now I have sons and I get to see behind the veil of masculinity that though boys may show bravado, inside they are still pretty insecure and squishy. I think that too is evolutionary. I know that if I had to coach boys again,  I would see it from a different perspective. I have learned that boys tend to overestimate their skills, while girls tend to underestimate themselves. I have always fought for the underdog, and maybe it’s the “Yes, you can do it”-ness of coaching girls that fulfills me.

I have written before about confidence and how we can help children develop it. I feel as strongly about independence and being self-secure*

Sports show us there are winners and learners and that we will not always be on the top of the podium at every meet. I cannot stand the meets and games that handout awards to every child. It doesn’t allow a child to assess any plan for success. It doesn’t validate their real effort, and it doesn’t imitate life at all.

So, I like coaching girls. I think I understand why, maybe I can’t explain it in a short 3o second chat, but I know that I can help make a difference. I believe that I should help to turn the boat and do my share to help the world see that women are just as strong, just as smart, just as assertive, just as capable, and just as good and anyone could ever ask. I think I owe that to my mom, who truly showed it to me.

*I hate the term “self-esteem” because it’s such a cliche. It has come to mean an entitled attitude of loving one’s self and feeling good. I use the term “self-secure” on purpose because it indicates a feeling of, though sometimes we may get frustrated with ourselves in action and habit, that we are comfortable knowing that we are good and functional in a positive way. It think it’s a healthy perspective on our self-image as opposed to a glossy “everything about me is great” feeling, that is a lie, at best.