What does it take to truly be a good coach? Well, I don’t want to be like the masked magician and the TV show “Magic’s Mysteries Unveiled” who spoiled magic for me by telling us the way magicians perform tricks, but there isn’t much mystery to be a good coach.

I am not a big fan of numbered lists, I think it’s lazy writing. But it seems that most people love the bullet points and numbered lists, so Here is a list of 10 things it takes to be a good coach, in no particular order. I wrote them as they came to me.

As the coach your efforts are directed at developing a successful team. We need to define success for ourselves and not focus on what others think success should be. But, as they say, that’s a whole other topic. In fact, “They” are right. A post a few months back I wrote about that very thing: Why we shouldn’t focus on Success; September 20, 2017.

When your team does well, it’s very easy to join them on the podium and get your picture next to the team as the trophy is hoisted in the air for photographs. But a good coach doesn’t do that. A good coach fades to the background and allows the athlete’s who worked for it to take the lime-light. On the other hand, when the team doesn’t fair well, the coach should step forward and take the heat. It was under the coach’s leadership that the team didn’t perform. Maybe the training plan was poorly designed, maybe the motivation wasn’t developed, or maybe the team just didn’t coalesce as a team. In any regard most poor performances can be traced back to the coach, and a good coach will use them as the foundation for future improvement.

This is a struggle for any coach because we are all very passionate about progress. I have worked with coaches that throw water bottles at walls, cuss at ki 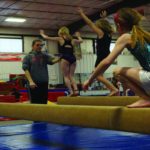 ds, or punish kids for not performing. My rule is that I try to only raise my voice when there is disrespect involved. Not following rules, back-talk, or unsafe behavior can all get my ire up. But it is very important that a good coach also be generous with praise. I tell my gymnasts that if I tell them something is done well, then it was done well. Some coaches throw out phrases like “good one”, “nice” or even the non-specific “Okay”. But then kids will perform for judges and wonder why none of their scores could be described as Good, Nice or Okay. The coach doesn’t do a service to the athlete with worthless praise. But a good coach also knows that a well-placed, meaningful compliment can carry a lot of weight.

A study by Florida University in 2007 showed that over 40 percent of employees will describe their boss as “bad” and most reasoning on the description is due to a lack of communication. I have always believed that to be effective as an educator (I used to be a school teacher) that the teacher should ask more questions than give answers. Socrates used that method of instruction. By allowing students (or athletes) the option of answering a question rather than just being told an answer, the learner owns material more readily. They retain the information longer and can apply it in multiple situations when needed.

It is also critical to use any opportunity to talk and explain directions, outcomes, or plans. I believe that my gymnasts should always play a part in developing their own success. I ask them questions about what they want to accomplish throughout the entire season.

Coaches should also never be afraid to say that they are wrong. Many of the kids spend more time with coaches than they do with parents on some days. In that regard it is imperative that a good coach understands that they are not only teaching the sport to a child but helping the child understand that everyone needs to be responsible for their actions and words. Coaches, parents, teachers, and just about every adult is still human.

Good or bad coaches have to make decisions all the time. Should we practice more or less? Should we train certain skills or avoid them? Should we attend certain meets, travel to certain locations, put an athlete as an All Around or a Specialist? Coaches are bombarded with decisions. A good coach will take counsel from athletes and co-coaches and make decisions as soon as possible. They will stick by a decision made and defend their choices, if need be, after careful thought and consideration. As I said in the last points (3 & 4), communicating your reasoning to the team, parents, or co-coaches makes it easier for them to be onboard with the plan. Good coaches communicate good plans.

Not every athlete is in the same boat. A good coach understands their team and knows that all members have an opportunity to be great. Some make you work harder to find greatness but that doesn’t mean that it’s not there. I had a coaching partner a while back that used to say that a team is only as good as its weakest player. Therefore, he believed that a proportional amount of time should be spent on raising the bottom players to the top. I agree, though I also believe that your top players won’t stay on top without attention. So, I think a great coach finds time for every team member equally.

I learned a long time ago that some kids respond better to reasoning, some need you to joke around a bit, some need stern direction, some need hands-on, some need much less. It is impossible to coach a whole team the same way. A good coach needs to develop tools to use when they find a child with a different learning style or motivation. Sometimes the tools go unused, but I guarantee that the bigger the team, the more the need for diverse strategic individual teaching plans.

In Major League Baseball or the NFL (or any sport on a professional format) the coaches make strategic decisions based on numbers, performance, or statistics. In Money Ball, the 2011 movie starring Brad Pitt, the manager of a baseball team uses statistics to retain players who could hit singles consistently and trades away homerun hitters. He keep his payroll down and his success ratio goes through the roof. With kids you cannot coach by statistics or numbers. Kids are in sports to develop skills, to be sure, but also to grow as people. We cannot treat them as numbers because we don’t run our programs solely to “make money”.

If the sport you coach is just something you “do” then get out. You will not be serving your athletes that way. If you don’t love the sport you coach than how will you ever get any of your athletes to commit to it?  If you love it, you want to be better at coaching it. You want to learn new techniques, you want to see your kids succeed. A good coach shares the love of the sport and it motivates the whole team. I have written many times about how gymnastics gave me everything in my life in some way or another. I don’t only love my sport, I live it.

You cannot skate out of some practices, leave early, or lose focus during training sessions. If you had an athlete that did any of those things you would change your roster. To be a good coach you have to know that your team will only give you a reflection of what you put forth. If you’re feeling frustrated your first step should be to look in the mirror.

Good coaches are not rare, and this list is not totally exclusive. There are many traits and practices that make a coach into a good coach or a great coach. Suffice to say it all starts with a passion for teaching and a genuine care for the children in their program.