Oh, if I had a dollar for every bit of wise advice that my mom fed me growing up…. Now as a parent, I see how frustrating it must have been for her to try to get me to listen when, of course, as a teenager, I always knew better, as teens always do. I experience now, with my own kids, my saying of things that they hear but don’t listen to, and it’s maddening. I want to tell them how I would have been smart to listen more, as a teen, than to speak more (I actually have said that exact phrase (many times)). There are some lessons, bits of wisdom, that I realize the value of now, and I want to make sure that I never stop pitching them to my kids. One day they, like I do now, will say “My Dad used to say that, wow, was he right.” I’m not holding my breath until I hear them utter that, but I’m sure it will happen. 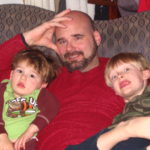 My “Little” boys and their “still-learning” Dad.

My mom was my shoulder to cry on, my pat on the back, my voice when I couldn’t speak (on occasion, see number 6), she was the sounding board for my crazy ideas, and my biggest fan. She was also my kick in the butt and the voice in my ear. She was my guide, my advisor, the gate-keeper of my freedom and, at times, she seemed like my jailor.  But even when I felt like she was more against me than for me; when I felt like she was wrong, and I was right, I always knew that she loved me more than any friend would. Because her love was unconditional. I try to have unconditional love for my boys but sometimes the condition of picking up their own mess is a hard one to get past. (That is the first of 2 jokes that some people won’t find funny. You did though, right?)

There were times when I begged my Mom to just “tell me what to do”. But she would feed me this line. She often told me that she would help to guide me, and sometimes I would make a decision and would see for myself that it was the wrong choice. I never knew how hard this was. I constantly want to tell my boys what will happen if they make certain decisions, but I try to let them think it through.

I was always told that I could always fix my own problems, the trick was doing something and trying to avoid the problem-creation phase in doing it. She was a big proponent of learning responsibility. I remember once when I accidently mowed over my neighbor’s flowers. I knew I had to go and apologize, she told me that I had to go on my own to do it because she wasn’t the one who mowed the flowers down. I was scared and anxious, but I went and apologized. You can bet I was very careful to abide by the property line the next time I mowed. I also learned that an apology goes a long way, being responsible is a grown-up expectation, and it’s better to take your time and do things correctly the first time.

My mom was the coach that used to say, “You don’t have to beat the other team, you just have to be better than yourself at the last game.” I’m not going to lie, I say that all the time to my team. She expected the best from us but knew that we had our limitations. We had to accept those limits and be satisfied that our effort would eventually lead to victory. She was so right, but I see now how hard it is to tell a child to be patient so, eventually, good things can come.

I try everyday to share what I have learned from my Mom and the many moms who I have had as role models, but sometimes you’re left to make up what you don’t know, or what you’ve never been shown. I guess that’s a lot like life in general.

My mother was very insistent on us learning so we could have an opinion that mattered. She told us to speak out but be aware that sometimes the best way to speak out is to say nothing. It is a lesson that I sometimes still struggle with as I have come to believe that everyone is entitled to my opinion. (Relax, that’s the second funny/not-funny joke.)

When you show respect to yourself most of all, to your friends and your friend’s interests, they will give you the same in return. It’s a very simple idea.

I have strived to give my children experiences. We travel as much as we can, we look for places to explore that don’t require travel, we go to meet people who we wouldn’t encounter every day, we eat different foods and we try to sample a bit of the world from where ever we are. If you look, and sometimes it’s easy to find, there are lessons in history, math, social studies, geography, logic, and humanity everywhere you go. As a parent I try to never lose an opportunity to learn and to teach.

Now that my kids are old enough to make their own money they must learn that money must be earned. There will always be money to be earned, there will always be work to be done. Food, clothes, toys, cars, houses, ice-cream, and vacations are paid for by doing work. Money is just a middle-man.

This is a famous quote, I cannot give you it’s originator, but it was a favorite of my mother. It taught me that when I strive to help others do well, I do well too. If we all did that, we would all be better for the effort. It was, as I can recall, my first lesson in altruism.

One day one of my son’s will post on a blog how much he learned from his Dad. How, even though he seemed to be too stern at times, he worked too much, and he sometimes pinched pennies, he was the wisest man he ever met. Then again, he could post 1400 words to say his old man was just full of it. I guess, as a parent, we do the best we can, with what we know, and hope for the best.