“Kids are not playing sports the way they used to.”  That sounds like something that my Dad would say, but it’s true. Research from the Sports Fitness Industry of America has shown a marked reduction in the numbers of kids playing sports. In 2018 there are 45% less kids playing sports, both team and individual. That’s a drop of more than 8%. Why?

When I was young we had a neighborhood league. It was called the Northwest Children’s Sports League and any kid in the neighborhood could join for less than $20 to play Football, Baseball, or Basketball. That $20 got you a Tee shirt, and a trophy at the end of the season (if you won one). The coaches were moms and dads who volunteered time, we practiced in the parks or at the middle school for basketball. It also got you about 10 games, a group of friends, good physical play, and a whole lot of fun.

Today’s kid’s are much more cost prohibited to participate in sports. No one plays pick-up games anymore, everything is done in leagues and through large associations. Fees for a season of games/tournaments can reach upward of  a few hundred dollars. There is a separation of Have and Have-nots for league play. SFIA research data shows that kids from low income households are half as likely to play any organized sport than a similar child from a family with household income above $100k.

Kids playing in low-cost leagues are often out-bid for court, field, ice, pool, or gym time by groups able to pay more for the space. 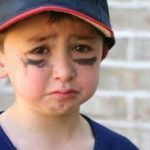 Parents (and society in general) have begun to define a child’s success in any sport as attaining a college scholarship, winning national titles, or even qualifying for international competition (which then is only successful if you win). Placing this emphasis on high level skill attainment or the like means that more kids are specializing in sports at earlier ages. If a child becomes frustrated, or unable to go further, they are often so specialized that it ends any additional sports participation. It also filters out many kids that are in a sport to have fun or be fit.

I remember when I was in high school and they cut Boy’s Gymnastics, so I tried playing Soccer. I was a good athlete but had never played the game before trying out for the team. My team mates were kids who played from the age of 4. I saw little time on the field and was so disappointed in my own ability, or lack of, that I never played soccer again. I wonder how many other kids, in similar situations have had similar reactions.

Reason 3: We forgot how important it is to be fit.

Dad works out at the local health club, Mom does Yoga and Pilates but Junior plays Madden 2018. We have forgotten that our kids need physical time as much as we do. I had a friend tell me when we were discussing this, that his son doesn’t NEED the stress relief that parents do. OMG!

When I was graduating college there was such a push for corporate fitness, there was an explosion of books about running, Pilates had just hit big, and healthy diets were gaining popularity. But People of my generation and below have forgotten why we all embraced that lifestyle. We know, after numerous studies, that having active children means  they will become active adults. We know that active kids, are less likely to become obese as adults which is a growing problem in America (apologies for the pun). We know active kids are better in the classroom, more likely to go to college and more likely to be “successful”. But instead of demanding a change in sports to be more accommodating, or developing other opportunities, we allow our kids to choose non-participation. We uncaringly walk right past them sitting on the couch playing X Box when we leave to go to our gym.

Reason 4: Privatization covers where pubic access has dropped the ball (again with the pun).

There are numerous reasons for this. Schools are so buried in the fear of being sued for liability that they reduce access to kids even playing let alone joining a sport. Because of this and funding cuts schools cannot provide for any quality programs. Private programs, most that operate for profit, have become the avenue for participation for most sports. Private ice arenas, pools, or fields have come along and operate as businesses. Now at the risk of shooting myself in the foot, I will say that gymnastics has become a very striated sport with very few opportunities for low income kids because of this very phenomenon. I believe that we, at Gymfinity, have operated in the face of every one of the reasons listed here. We have tried to combat these issues and I will address how in the next Blog Post.

Reason 5: The demands on coaches have been raised but the quality of coaches has declined.

I remember the coaches in the NCSL from my youth. Nobody demanded that coaches had a vast knowledge of rules and strategies. No one expected these volunteers to have safety training, or training in child psychology. My mom volunteered to be a softball umpire for the girls’ league despite having no daughters and only a moderate level of understanding of the sport at best. She was there, she volunteered, and she did a good job.

Today coaches in youth sports need to display mastery in 6 core competencies: General Safety, injury prevention and concussion management, Effective motivational techniques, CPR, Basic first aid, Physical conditioning, and Sport specific skills and tactics. The study I referred to earlier explains that 70% of coaches today cannot meet this criterion. Today, we would no longer allow my Mom to volunteer. This low-level leadership again means that a child’s experience may be frustrating and ultimately end up deterring participation rather than enhancing it.

Sports take a bad rap. Without doubt there are some bad people and bad situations in and around sports. From players dying of heat stroke to team doctors abusing their athletes; the press is ever eager to proclaim sports as a bad or unsafe activity for kids. But I find just the opposite. I would never want to downplay any of the horrific things that have happened to families and athletes, but it is as it always was. Larry Nassar is not the first predator to feed on athletes in his care, and sadly he may not be the last. Parents and kids must be diligent and choose programs that “feel” trustworthy. Never trust your child with anyone who is not 100% transparent. This could be a separate post, and I don’t want to go too far down this rabbit hole. What happens in some settings is and was terrible, but we are today more aware and preventative than ever. Don’t let the press deter you from allowing your child to be an athlete.

The study from the Sports Fitness Industry of America relates that the biggest loses in participants has occurred in team sports and mostly the big 4 (baseball, football, basketball, and soccer). Oddly enough the sports that have shown the least loss, or in some cases shown growth, are golf, hockey, track and field, and …..wait for it…..Gymnastics.

In the next post I will try to answer what we can do to reverse the trend of kids dropping out of sports as well as sharing what Gymfinity is doing to combat the loss.